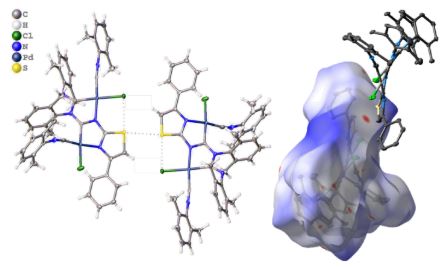 The coupling of cis-[PdCl2(CNXyl)2] (Xyl = 2,6-Me2C6H3) with 4-phenylthiazol-2-amine in molar ratio 2:3 at RT in CH2Cl2 leads to binuclear (diaminocarbene)PdII complex 3c. The complex was characterized by HRESI+-MS, 1H NMR spectroscopy, and its structure was elucidated by single-crystal XRD. Inspection of the XRD data for 3c and for three relevant earlier obtained thiazole/thiadiazole derived binuclear diaminocarbene complexes (3a EYOVIZ; 3b: EYOWAS; 3d: EYOVOF) suggests that the structures of all these species exhibit intra-/intermolecular bifurcated chalcogen bonding (BCB). The obtained data indicate the presence of intramolecular S•••Cl chalcogen bonds in all of the structures, whereas varying of substituent in the 4th and 5th positions of the thiazaheterocyclic fragment leads to changes of the intermolecular chalcogen bonding type, viz. S•••π in 3a,b, S•••S in 3c, and S•••O in 3d. At the same time, the change of heterocyclic system (from 1,3-thiazole to 1,3,4-thiadiazole) does not affect the pattern of non-covalent interactions. Presence of such intermolecular chalcogen bonding leads to the formation of one-dimensional (1D) polymeric chains (for 3a,b), dimeric associates (for 3c), or the fixation of an acetone molecule in the hollow between two diaminocarbene complexes (for 3d) in the solid state. The Hirshfeld surface analysis for the studied X-ray structures estimated the contributions of intermolecular chalcogen bonds in crystal packing of 3a–d: S•••π (3a: 2.4%; 3b: 2.4%), S•••S (3c: less 1%), S•••O (3d: less 1%). The additionally performed DFT calculations, followed by the topological analysis of the electron density distribution within the framework of Bader’s theory (AIM method), confirm the presence of intra-/intermolecular BCB S•••Cl/S•••S in dimer of 3c taken as a model system (solid state geometry). The AIM analysis demonstrates the presence of appropriate bond critical points for these interactions and defines their strength from 0.9 to 2.8 kcal/mol indicating their attractive nature