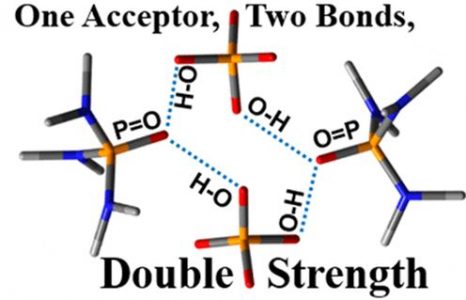 Hydrogen bond patterns of crystals of phosphinic, phosphonic, and phosphoric acids and their cocrystals with phosphine oxides were studied using 31P NMR and single-crystal X-ray diffraction. Two main factors govern these patterns and favor or prevent the formation of cocrystals. The first one is a high proton-accepting ability of the P═O moiety in these acids. As a result, this moiety effectively competes with other proton acceptors for hydrogen bonding. For example, this moiety is a stronger proton acceptor than the C═O moiety of carboxylic acids. The second factor is the inclination of the P═O moiety of both the acids and the oxides to form two hydrogen bonds at once. The peculiarity of these bonds is that they weaken each other to a little degree only. In order to highlight this point, we are using the term “ambidextrous”. These two features should govern the interactions of P═O moiety with water and other proton donors and acceptors in molecular clusters, the active sites of enzymes, soft matter, and at surfaces.