Previously we have written about the PC program playing back FID data (see the post from 29.04.2015). There is a logical continuation of this idea: a whole Christmas song performed on NMR spectra of molecules, see also the original blog entry by Andrew Hall from the University of Bath.

A new thiosemicarbazidе-modiﬁed silica gel (SG-THSC) sorbent was prepared. The sorbent was quantified by adsorption of mercury ions on silica gel, desorption and then spectrophotometry detection of mercury ions. The retention parameters (sample flow rate, eluent type, sample volume, presence of foreign ions, shaking time, sample flow rate and volume, eluent condition, interfering substances) were investigated. The quantitative recovery (>95%) of Hg(II) ions could be obtained by use of 5 mL of 6 mol L−1 HCl. The adsorption capacity of SG-THSC was found to be 98.3 mg g–1 at optimum pH. The maximum preconcentration factor was 400. The technique detection limit was 70 ng L–1, and the relative standard deviation was lower than 4.0% (n = 6). The studied sorbent was applied to preconcentrate the trace Hg(II) from the mineralised residues of fish and seawater samples. 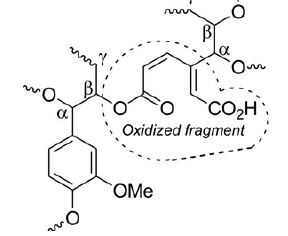 “Perovskites with the Framework-Forming Xenon” 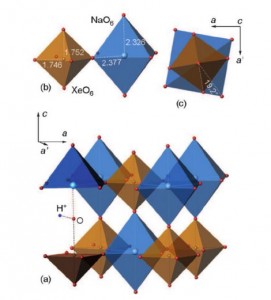 The Group 18 elements (noble gases) were the last ones in the periodic system to have not been encountered in perovskite structures. We herein report the synthesis of a new group of double perovskites KM(XeNaO6) (M=Ca, Sr, Ba) containing framework-forming xenon. The structures of the new compounds, like other double perovskites, are built up of the alternating sequence of corner-sharing (XeO6) and (NaO6) octahedra arranged in a three-dimensional rocksalt order. The fact that xenon can be incorporated into the perovskite structure provides new insights into the problem of Xe depletion in the atmosphere. Since octahedrally coordinated XeVIII and SiIV exhibit close values of ionic radii (0.48 and 0.40 Å, respectively), one could assume that XeVIII can be incorporated into hyperbaric frameworks such as MgSiO3 perovskite. The ability of Xe to form stable inorganic frameworks can further extend the rich and still enigmatic chemistry of this noble gas. 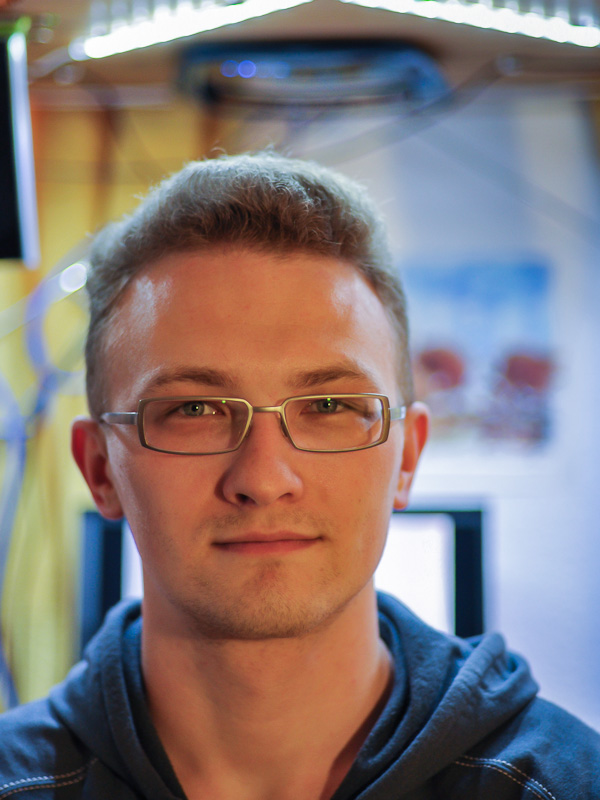 Today Andrey Gurinov quit the Center. We wish him all the best on his is new job!

A. Gurinov | Comments Off on Fewer and fewer | Tags: Gurinov
Acknowledging publications • Publications

Guanazyl groups were grafted on silica gel by 4-nitrobenzoyl chloride acylation, sodium dithionite reduction, diazotation, and reaction with 2-benzylidenehydrazinecarboximidamide. The modified silica gel was used for separation and preconcentration of Cu(II), Ni(II), Cd(II), and Co(II). Quantitative extraction of the ions was achieved after 30 min and at the optimal pH of 7.5-8 at an initial concentration of 2 mg L−1. Analysis of metal sorption isotherms allowed estimation of the sorbent’s interaction efficacy under static conditions at optimal pH. Distribution coefficients were determined to be 3 ± 0.3 L g−1 for Ni(II), 3 ± 0.3 L g−1 for Co(II), 1.6 ± 0.2 L g−1 for Cd(II), and 4.6 ± 0.4 L g−1 for Cu(II) at 20-60 µg analyte. The applicability of pseudo-second order kinetic equations for metal sorption kinetics description was investigated. Chemically modified silica was used for solid-phase extraction of the metal ions to improve the detection limit using X-ray fluorescence spectrometry. The method was employed for the determination of Cu(II) in water with a low limit of detection, high accuracy, and good precision.

A. Gurinov | Comments Off on Analytical Lett. 2014 | Tags: Gurinov
Daybook 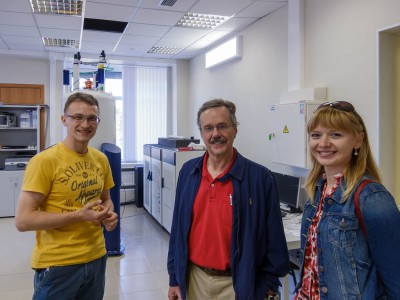 Today Prof. Dr. Meinrat O. Andreae – director of the Biogeochemistry Department and Scientific Member at the Max Planck Institute for Chemistry in Mainz, visited our Center. 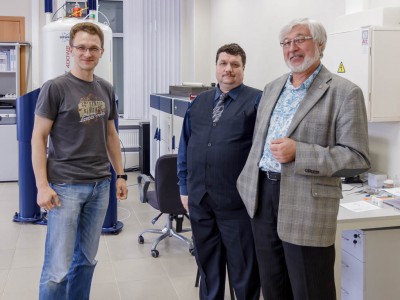 A. Gurinov | Comments Off on MSTU representatives | Tags: Gurinov
Daybook

Today Prof. Johann Schneider, a Fellow of CFEL and scientific advisor to the DESY Directorate, visited our Center. 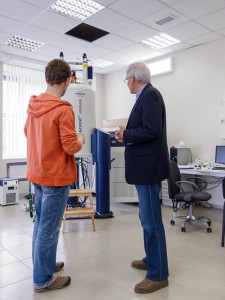 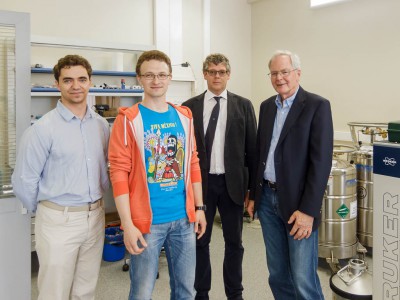 19 and 21 May prof. Limbach held the first part of G-RISC Workshop “NMR as interdisciplinary tool for the study of non-covalent interactions”.
The program was as follows: 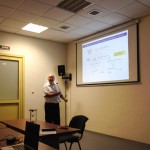 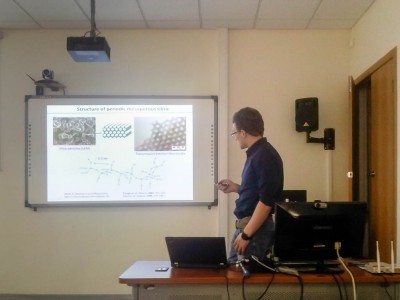 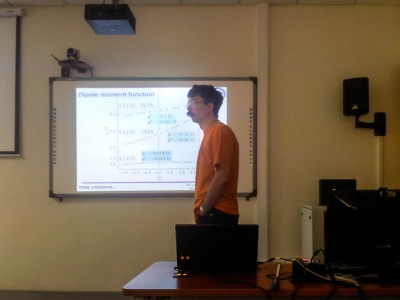 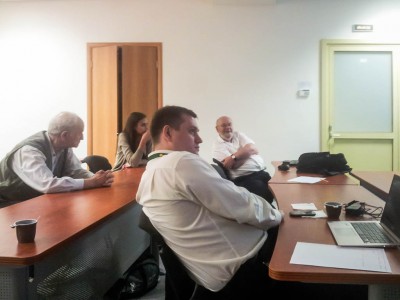 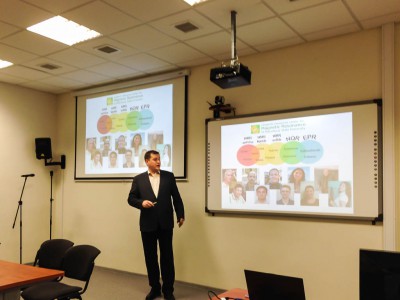 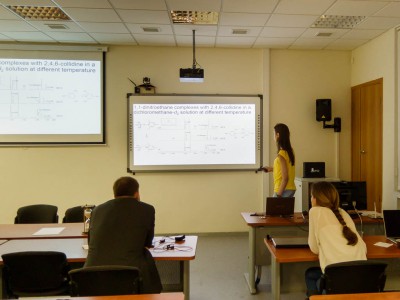 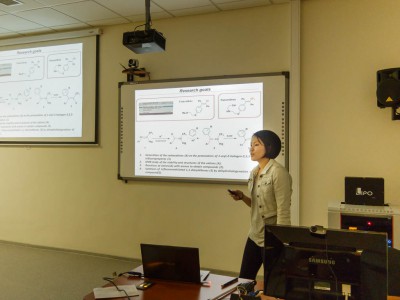 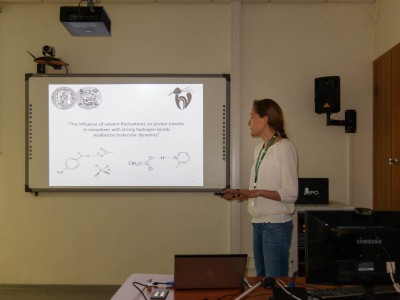 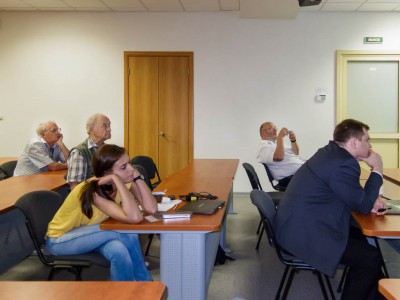