The intermolecular interactions between an anionic polysaccharide from the red algae κ-carrageenan and a gelatin polypeptide, forming stoichiometric polysaccharide–polypeptide (bio)polyelectrolyte complexes in the aqueous phase, were examined. The major method of investigation was high-resolution 1H NMR spectroscopy. Additional data were obtained by UV absorption spectroscopy, light scattering dispersion and capillary viscometry. Experimental data were interpreted in terms of the changing roles of electrostatic interactions, hydrophobic interactions and hydrogen bonds when κ-carrageenan–gelatin complexes are formed. At high temperatures, when biopolymer macromolecules in solution are in the state of random coil, hydrophobic interactions make a major contribution to complex stabilization. At the temperature of gelatin’s coil → helix conformational transition and at lower temperatures, electrostatic interactions and hydrogen bonds play a defining role in complex formation. A proposed model of the κ-carrageenan–gelatin complex is discussed.

CMR users continue to delight us with high activity. Three of the most active departments awarded honorary certificates. Designated as follows:

A. Grevtsev | Comments Off on CMR users activity
Fun

Sometimes our staff carry out the high-level service works.

A. Grevtsev | Comments Off on High-level
Process

Total in June 1317 service applications were carried out.
All together measured:

159 applications were carried out.

A. Grevtsev | Comments Off on June
Acknowledging publications 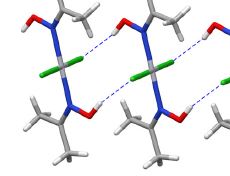 The oxidation of (oxime)PtII species using the electrophilic chlorine-based oxidant N,N-dichlorotosylamide (4-CH3C6H4SO2NCl2) was studied. The reactions of trans-[PtCl2(oxime)2] (where oxime = acetoxime, cyclopentanone oxime, or acetaldoxime) with this oxidant led to trans-[PtCl4(oxime)2] products. The oxidation of trans-[Pt(o-OC6H4CH = NOH)2] at room temperature gave trans-[PtCl2(o-OC6H4CH = NOH)2], whereas the same reaction upon heating was accompanied by electrophilic substitution of the benzene rings.