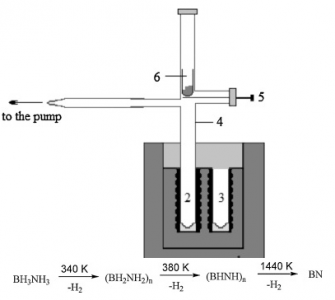 Thermal behavior of ammonia borane BH3NH3 (AB) has been studied by calorimetry, tensimetry and mass spectrometry methods. It is shown, that depending on vapor pressure in the system two competitive processes are taking place at 357 K. At atmospheric pressure thermal decomposition with hydrogen evolution is the dominant process: BH3NH3(s) = 1/n (BH2NH2)n(s) + H2(g) (1). At low pressures (circa 4 mTorr) the major process is endothermic sublimation of AB: BH3NH3(s) = BH3NH3(g) (2). At intermediate pressures both processes occur simultaneously. Enthalpies for the processes (1) and (2) have been determined by drop-calorimetry method: Δ(1)H357° = −24.8 ± 2.3 kJ mol−1 and ΔsubH357°(BH3NH3) = 76.3 ± 3.0 kJ mol−1. Solid products after sublimation and decomposition have been characterized by IR and NMR spectroscopy; gaseous forms were studied by mass spectrometry. Activation energy of 94 ± 11 kJ mol−1 for the process (1) in range 327–351 K was determined by static tensimetry method. Based on the analysis of available thermodynamic characteristics, new values for the standard formation enthalpy of solid AB −133.4 ± 5.2 kJ mol−1 and polyamidoborane −156.7 ± 5.8 kJ mol−1 are recommended.