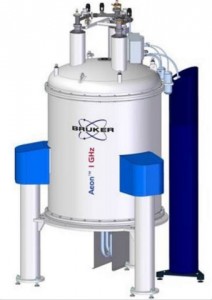 1 GHz NMR system with a first-generation, unshielded 23.5 Tesla magnet has been running at the Ultra-High Field NMR Center in Lyon, France since 2009. Bruker intends to deliver the world’s first, next-generation 1GHz NMR systems with actively-shielded Aeon™ 1 GHz magnets to the University of Bayreuth, Germany, in late 2015, and to the University of Toronto, Canada in the first half of 2016.
Ultra-high field NMR in combination with other experimental and computational methods, has recently been shown to enable more detailed studies of the structural ensembles, post-translational modifications, dynamics, multiple interactions, specific binding partners, signaling and regulatory roles, formation of membrane-less cellular organelles, and other functions of Intrinsically Disordered Proteins (IDPs).

A. Grevtsev | Comments Off on Next-Generation GigaHertz NMR
Daybook

From what we have already seen

At CMR we have measured NMR spectra of these nuclei

A. Grevtsev | Comments Off on From what we have already seen
Process

Total in May 1457 service applications were carried out.
All together measured:

196 applications were carried out which jointly took 1831 hours of measurements.

A. Grevtsev | Comments Off on May
Conferences

Excursion for participants of the conference

Today, participants of the conference “Development of centers for collective use of scientific equipment and unique research units” have visited our center. During the demonstration our guests have learned how we organize the work, how to start a joint research project and which results were achieved in 2014.

A. Grevtsev | Comments Off on Excursion for participants of the conference
Process

Artem Grevtsev and Anton Mazur have presented two educational research projects which high-school students of leading physical and mathematical schools of St. Petersburg could run during their summer practice in June.

A. Grevtsev | Comments Off on Summer practice for high-school students