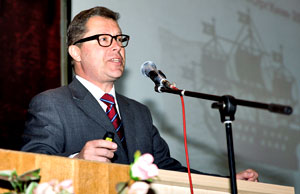 Vadim Kukushkin, chairman of the organizing committee of the OrgChem-2013

The newspaper “Sankt-Peterburgskie Vedomosti” left a note (in Russian only) on the conference OrgChem-2013, which was attended by employees of the Center and during which three resource centers of St. Petersburg State University successfully held an open doors day.

PS Our center has nothing to do with so-called “research” on “ultra-low concentrations”, which are mentioned in the next article.

A. Gurinov | Comments Off on Note