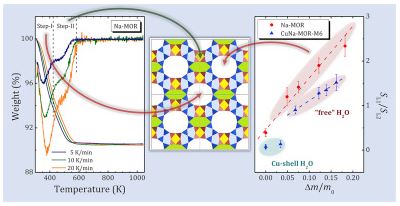 Comprehensive research of water behavior in Na- and Cu-mordenites with different Na/Cu ratio was done. Several steps of dehydration process were detected and analyzed, taking into account difference in chemical composition of the samples, reaction models and corresponding kinetic equations. Activation energies for these steps were calculated. It was shown that the majority of dehydration steps for all zeolite samples studied might be associated with chemical reaction mechanism corresponding to the second order kinetic model, except for the most high-temperature step for Cu-mordenite, for which the third-order model has the higher correlation coefficient. A detailed analysis of rehydration processes was studied by proton NMR spectroscopy. The obtained results allow one to distinguish different types of water and to associate them with a certain localization of water molecules in zeolite voids: the main channel for both Na and Cu-mordenites; a side pocket of Na-mordenite; molecules coordinated with Cu2+ cations in Cu-mordenite. The diffusion measurements carried out using static field gradient NMR technique proved that the water diffusion character below 300 K is essentially intracrystalline, whereas above 300 K it becomes intercrystalline. The activation energy of intercrystalline diffusion is about 28 kJ/mol and does not depend on the Na/Cu ratio. That allows us to suppose that in the studied zeolites the intercrystalline diffusion is governed by the morphology of the sample mainly.