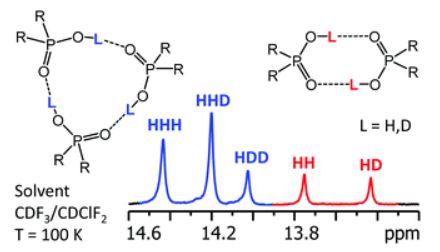 The hydrogen-bonded self-associates of dimethylphosphinic (1), diphenylphosphoric (2), phenylphosphinic (3), and bis(2,4,4-trimethylpentyl)phosphinic (4) acids have been studied by using liquid-state NMR down to 100 K in a low-freezing polar solvent, CDF3/CDClF2. The H/D isotope effects on 1H NMR chemical shifts caused by partial deuteration of hydroxyl groups unambiguously reveal the stoichiometry of the self-associates and the cooperativity of their hydrogen bonds. In all cases, cyclic trimers are the dominant form, while cyclic dimers are present as a minor form for 1 and 2. Due to the asymmetry of substituents, cyclic trimers of 3 exist in two isomeric forms, depending on the orientation of the phenyl groups with respect to the plane of the hydrogen bonds. The racemic mixture of 4 leads to the coexistence of up to 64 isomers of cyclic trimers, many of which are chemically equivalent or effectively isochronous. The mole fractions of such isomers deviate from the statistically expected values. This feature could provide information about the relative stabilization energies of hydrogen-bonded chiral self-associates. The complexation of 4 with SbCl5 (complex 5) suppresses the self-association and 5 exists exclusively in the monomeric form with chemically non-equivalent 31P nuclei in RS, SR and RR/SS forms