The microstructure of polybutadiene synthesized via cationic polymerization using TiCl4‐based initiating systems has been investigated using 1D (1Н, 2Н, and 13С) and 2D (HSQC and HMBC) NMR spectroscopy. It was found that trans‐1,4‐unit is predominant structure of unsaturated part of polymer chain. Besides, the small amount of 1,2‐structures was also detected, while cis‐1,4‐units were totally absent. The signals of carbon atoms of three types of head groups (trans‐1,4‐, 1,2‐, and tert‐butyl) and two types of end groups (trans‐1,4‐Cl and 1,2‐Cl) were identified for the first time in macromolecules of cationic polybutadiene. It was showed that tert‐butyl head groups were formed due to the presence in monomer of admixtures of isobutylene. The new methodology for calculation of the content of different structural units in polybutadiene chain as well as the head and end groups was proposed. It was established that main part of 1,2‐units distributed randomly along the polybutadiene chain as separate units between trans‐1,4‐structures. 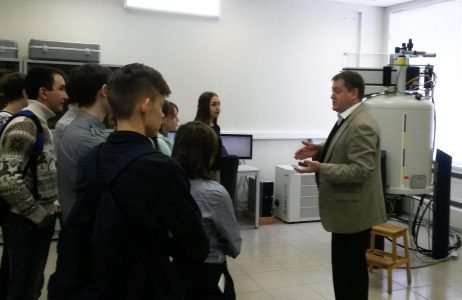 The addition of Lewis acids change the reaction mechanism of the cycloaddition of N-vinylpyrroles with azomethine imine and C,N-diarylnitrones. The formal (3+3)-cycloaddition is observed instead of (3+2)-dipolar cycloaddition, which take place in the absence of catalysts. This unusual (3+3)-cycloaddition leads to heterocyclic compounds with pyrazolo[1,2-a]pyrrolo[1,2-d][1,2,4]triazine- and pyrrolo[2,1-d][1,2,5]oxadiazine cores, which are difficultly achievable by other methods.

A novel method to prepare biologically relevant 1H-imidazol-5(4H)-ones from aliphatic amines, isobutyraldehyde, chloroacetyl chloride and sodium azide under microwave irradiation has been developed.