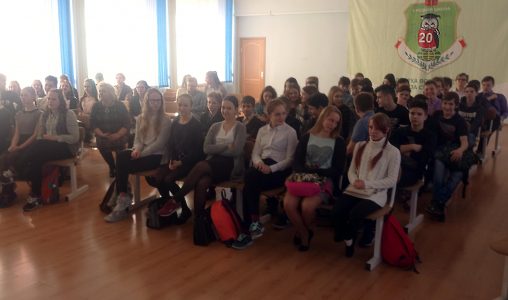 “Complications in the Castagnoli-Cushman reaction: An unusual course of reaction between cyclic anhydrides and sterically hindered indolenines” 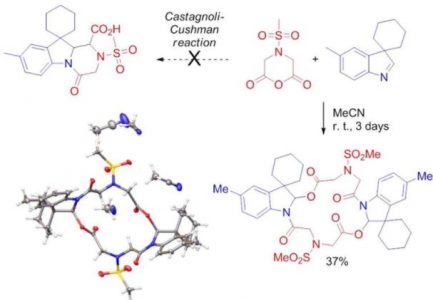 Attempted reaction of indolenines (which represent rather sterically hindered cyclic imines) with a series of dicarboxylic acid anhydrides yielded no expected product, the Castagnoli-Cushman lactam. Instead, products presumably formed via N-acyliminium species trapping by a carboxylate anion. Among them, hydrolytically labile 2:2 adducts of an indolenine and a cyclic anhydride, containing a 16-membered cyclic core, are particularly intriguing. This result contradicts the recently reported successful Castagnoli-Cushman reaction of indolenines with homophthalic anhydride suggesting a mechanistic switch in the course of the reaction.

We have investigated the behavior of second RNA-recognition motif (RRM2) of neuropathological protein TDP43 under the effect of oxidative stress as modeled in vitro. Toward this end we have used the specially adapted version of H/D exchange experiment, NMR relaxation and diffusion measurements, dynamic light scattering, controlled proteolysis, gel electrophoresis, site-directed mutagenesis and microsecond MD simulations. Under oxidizing conditions RRM2 forms disulfide-bonded dimers that experience unfolding and then assemble into aggregate particles (APs). These particles are strongly disordered, highly inhomogeneous and susceptible to proteolysis; some of them withstand the dithiothreitol treatment. They can recruit/release monomeric RRM2 through thiol-disulfide exchange reactions. By using a combination of dynamic light scattering and NMR diffusion data we were able to approximate the size distribution function for the APs. The key to the observed aggregation behavior is the diminished ability of disulfide-bonded RRM2 dimers to refold and their increased propensity to misfold, which makes them vulnerable to large thermal fluctuations. The emerging picture provides detailed insight on how oxidative stress can contribute to neurodegenerative disease, with unfolding, aggregation, and proteolytic cleavage as different facets of the process.

A substantial improvement of potency and selectivity of imidazoline-based inhibitors of hCA VII (a promising target for the treatment of seizures and neuropathic pain) was achieved by simply switching the position of the benzenesulfonamide moiety from N1 (as in the earlier reported series) to C2. Selectivity indices vs the off-target isoforms (hCA I, I, I and IV) greater than 100 were reached, which is exceedingly rare for hCA VII inhibitors. The drastic profile improvement of the new series has been rationalized by an additional hydrogen bonding with the nonconserved Q69 residue in the active site of hCA VII (absent in the other three isoforms studied), which also results in a favorable accommodation of the inhibitor’s lipophilic periphery in the nearby hydrophobic pocket. The robustness of the docking simulations was tested and confirmed by molecular dynamics simulations 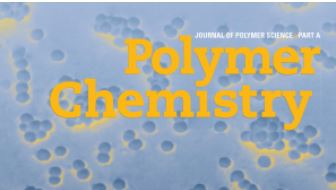 The microstructure of polybutadiene synthesized via cationic polymerization using TiCl4-based initiating systems has been investigated using 1D (1Н, 2Н, and 13С) and 2D (HSQC and HMBC) NMR spectroscopy. It was found that trans-1,4-unit is predominant structure of unsaturated part of polymer chain. Besides, the small amount of 1,2-structures was also detected, while cis-1,4-units were totally absent. The signals of carbon atoms of three types of head groups (trans-1,4-, 1,2-, and tert-butyl) and two types of end groups (trans-1,4-Cl and 1,2-Cl) were identified for the first time in macromolecules of cationic polybutadiene. It was showed that tert-butyl head groups were formed due to the presence in monomer of admixtures of isobutylene. The new methodology for calculation of the content of different structural units in polybutadiene chain as well as the head and end groups was proposed. It was established that main part of 1,2-units distributed randomly along the polybutadiene chain as separate units between trans-1,4-structures.