Intermolecular complex with CHN hydrogen bond formed by 1,1-dinitroethane (DNE) and 2,4,6-trimethylpyridine (collidine) dissolved in CD2Cl2 was studied experimentally by 1H NMR spectroscopy at 180-300 K. Equilibrium between molecular CH⋅⋅⋅N form and zwitterionic C−/HN+ form was detected in slow exchange regime in NMR time scale. No sign of direct C−⋅⋅⋅HN+ bond was observed; the ion pair is likely to be held by Coulomb interactions. Moreover, there are indications that the protonated base is involved in formation of homo-conjugated (NHN)+ collidine-collidinium hydrogen bonded complexes.
The reaction pathway of proton transfer in DNE-pyiridine complex in vacuum was studied computationally at B3LYP/6-31++G(d,p) level of theory. NMR chemical shifts and coupling constants were calculated for a series of snapshots along the proton transfer coordinate. While central carbon atom has pyramidal (sp3) configuration in DNE, it is flat (sp2) in DNE carbanion. As a result, the most indicative computed NMR parameter reflecting hybridization of carbon atom appeared to be 1JCC, which starts to change rapidly as soon as structure with quasi-symmetric C⋅⋅H⋅⋅N bond is reached. Couplings within the hydrogen bridge, 1JCH, 1hJHN and 2JCN, can serve as good indicators of the degree of proton transfer.

By using a combination of liquid and solid-state NMR spectroscopy, 15N-labeled 4-methylimidazole (4-MI) as a local probe of the environment has been studied: 1) in the polar, wet Freon CDF3/CDF2Cl down to 130 K, 2) in water at pH 12, and 3) in solid samples of the mutant H64A of human carbonic anhydrase II (HCA II). In the latter, the active-site His64 residue is replaced by alanine; the catalytic activity is, however, rescued by the presence of 4-MI. For the Freon solution, it is demonstrated that addition of water molecules not only catalyzes proton tautomerism but also lifts its quasidegeneracy. The possible hydrogen-bond clusters formed and the mechanism of the automerism are discussed. Information about the imidazole hydrogen-bond geometries is obtained by establishing a correlation between published 1H and 15N chemical shifts of the imidazole rings of histidines in proteins. This correlation is useful to distinguish histidines embedded in the interior of proteins and those at the surface, embedded in water. Moreover, evidence is obtained that the hydrogen-bond geometries of His64 in the active site of HCA II and of 4-MI in H64A HCA II are similar. Finally, the degeneracy of the rapid tautomerism of the neutral imidazole ring His64 reported by Shimahara et al. (J. Biol. Chem. 2007, 282, 9646) can be explained with a wet, polar, nonaqueous active-site conformation in the inward conformation, similar to the properties of 4-MI in the Freon solution. The biological implications for the enzyme mechanism are discussed. 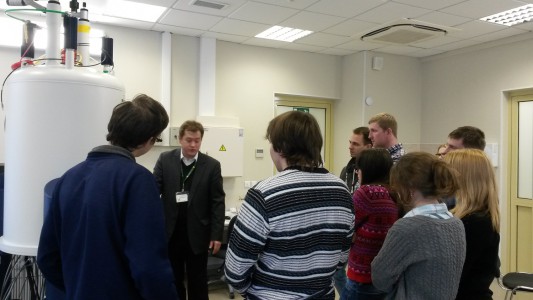 In this study, a new family of tetranuclear gold(I)triphosphine derivatives bearing alkynyl and thiolate groups have been efficiently synthesized by treating the polymeric acetylides (AuC2R)n or a thiolate (AuSPh)n sequentially with the (a) phosphine ligand and (b) cationic complex [Au3(P^P^P)2]3+ (P^P^P = PPh2CH2PPhCH2PPh2). The clusters [Au4(P^P^P)2(C2R)2]2+ [R= Ph (1), biphenyl (2), terphenyl (3), C6H4OMe (4), C6H4NMe2 (5), C6H11O (6), and C6H4CF3 (7)] and [Au4(P^P^P)2(SPh)2]2+(8) were characterized by X-ray crystallography in the solid state.
NMR spectroscopic investigations in solution revealed that the majority of alkynyl clusters 1−7 exist as two isomeric species in slow chemical equilibria. All complexes 1−8 exhibit moderate-to-strong photoemission in the solid state with quantum yields from 0.07 to 0.51. The luminescence behavior was rationalized using quantum chemical density functional theory methods. The high emission efficiency of these tetragold(I) compounds and their good stability in film allowed for the fabrication of an organic electroluminescent device (OLED). Employing complex 5 (Φ = 0.51), an OLED was fabricated under a solution process to give a good external quantum efficiency of 3.1%, corresponding to a current efficiency of 6.1 cd/A and a power efficiency of 5.3 lm/W, with Commission Internationale de I’Eclairage coordinates of (0.52, 0.46).