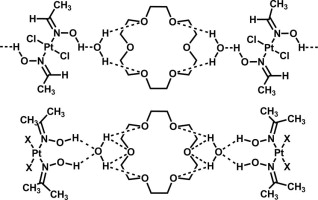 The associates 2(cis-[PtCl2(acetoxime)2])⋅18-crown-6⋅2H2O (1), 2(cis-[PtBr2(acetoxime)2])⋅18-crown-6⋅2H2O (2), and trans-[PtCl2(acetaldoxime)2]⋅(18-crown-6)⋅2H2O (3) were synthesized by co-crystallization of free corresponding platinum species and 18-crown-6 from wet solvents and characterized by 1H NMR and IR spectroscopies, high-resolution mass-spectrometry (ESI), TG/DTA, and X-ray crystallography. The (oxime)Pt(II) species are assembled with 18-crown-6 and water by hydrogen bonding between the hydroxylic hydrogen atoms of the oxime ligands and the oxygen atom of water and between the hydrogen atoms of water and the oxygen atoms of 18-crown-6. In 2(cis-[PtX2(acetoxime)2])⋅18-crown-6⋅2H2O (where X = Cl (1), Br (2)), the molecule of the crown ether is located between the two cis-[PtX2(acetoxime)2] species. The associate trans-[PtCl2(acetaldoxime)2]⋅(18-crown-6)⋅2H2O (3) crystallizes into a 1D array structure. Water molecules play the role of linkers between the (oxime)Pt(II) species and the crown ether molecules. The electronic structures and vibrational frequencies of the triple associates were studied by density functional theory (DFT/B3LYP).