“NMR and FT-IR studies on the association of derivatives of thymidine, adenosine, and 6-N-methyl-adenosine in aprotic solvents” 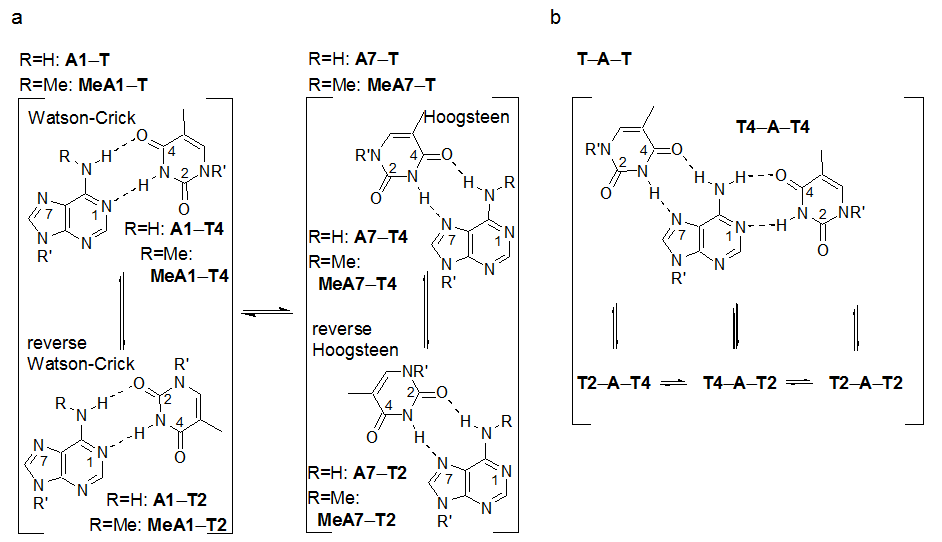 Abstract:
Associates of 3’,5’-O-TBDMS protected derivatives of deoxynucleosides adenosine, 6-N-methyl-adenosine and thymidine (henceforward simply addressed by their parents’ names) and further model systems in dichloromethane and Freon (CDClF2/CDF3) solu-tions are studied at low temperatures by 1H NMR and FT-IR spectroscopy. N…N distances in hydrogen bonds are estimated from chemical shifts of protons in hydrogen bonds employing geometric and spectroscopic hydrogen bond correlations. These distances are in turn employed to derive NH stretching frequencies from IR spectroscopic hydrogen bond correlations which may be compared to corresponding experimental results. Three isomeric hydrogen bonded dimers of thymidine are characterized in Freon solution at 120 K. Binary associates of thymidine and a series of pyridines are studied; estimated N…N distances in the range of 3.08 to 2.85 Å are qualitatively correlated to shifts of NH stretching bands where in all cases considerable contributions are found in the spectral region below 3000 cm-1. For adenosine, three isomeric binary associates with 4-nitrophenol are found allowing for an assessment of site-specific acceptor capabilities. In associates of thymidine and adenosine, Watson-Crick and Hoogsteen type 1:1 associates (estimated N…N distances of 2.85 and 2.90 Å) as well as 2:1 associates bearing only marginally longer (i.e. weaker) H-bonds could be characterized. Two 1:1 associates between thymidine and 6-N-methyl-adenosine are desctibed that are exclusively bonded via NH…N bridges of about 2.97 and 3.08 Å for Watson-Crick and Hoogsteen sites, respectively, which leads to the conclusion that cooperative effects among coupled NH…O and NH…N hydrogen bonds in A-T base pairs are significant as formation of the NH…O bond induces a contraction of around 0.15 Å in the neighboring NH…N bond.